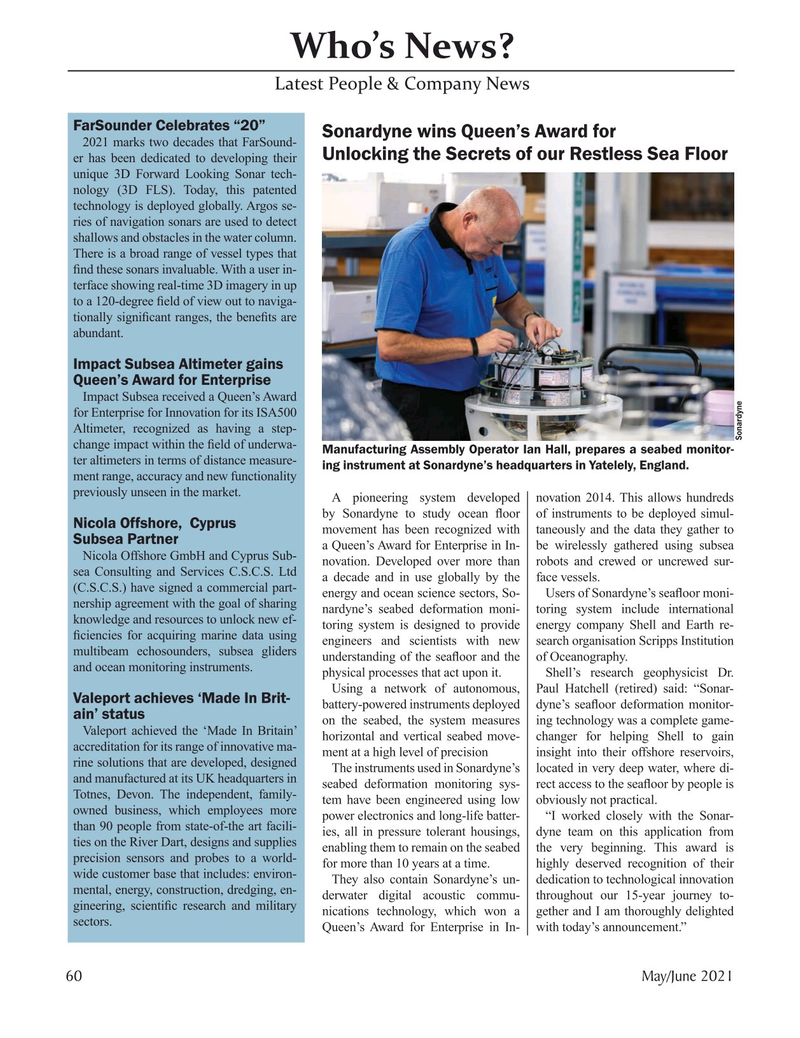 Unlocking the Secrets of our Restless Sea Floor er has been dedicated to developing their unique 3D Forward Looking Sonar tech- nology (3D FLS). Today, this patented technology is deployed globally. Argos se- ries of navigation sonars are used to detect shallows and obstacles in the water column.

There is a broad range of vessel types that ? nd these sonars invaluable. With a user in- terface showing real-time 3D imagery in up to a 120-degree ? eld of view out to naviga- tionally signi? cant ranges, the bene? ts are abundant.

Altimeter, recognized as having a step-

Sonardyne change impact within the ? eld of underwa-

A pioneering system developed novation 2014. This allows hundreds by Sonardyne to study ocean ? oor of instruments to be deployed simul-

Nicola Offshore, Cyprus movement has been recognized with taneously and the data they gather to

Nicola Offshore GmbH and Cyprus Sub- novation. Developed over more than robots and crewed or uncrewed sur- sea Consulting and Services C.S.C.S. Ltd a decade and in use globally by the face vessels.

Valeport achieved the ‘Made In Britain’ horizontal and vertical seabed move- changer for helping Shell to gain accreditation for its range of innovative ma- ment at a high level of precision insight into their offshore reservoirs, rine solutions that are developed, designed

The instruments used in Sonardyne’s located in very deep water, where di- and manufactured at its UK headquarters in seabed deformation monitoring sys- rect access to the sea? oor by people is

Totnes, Devon. The independent, family- tem have been engineered using low obviously not practical. owned business, which employees more power electronics and long-life batter- “I worked closely with the Sonar- than 90 people from state-of-the art facili- ies, all in pressure tolerant housings, dyne team on this application from ties on the River Dart, designs and supplies enabling them to remain on the seabed the very beginning. This award is precision sensors and probes to a world- for more than 10 years at a time. highly deserved recognition of their wide customer base that includes: environ-

Queen’s Award for Enterprise in In- with today’s announcement.” 60 May/June 2021