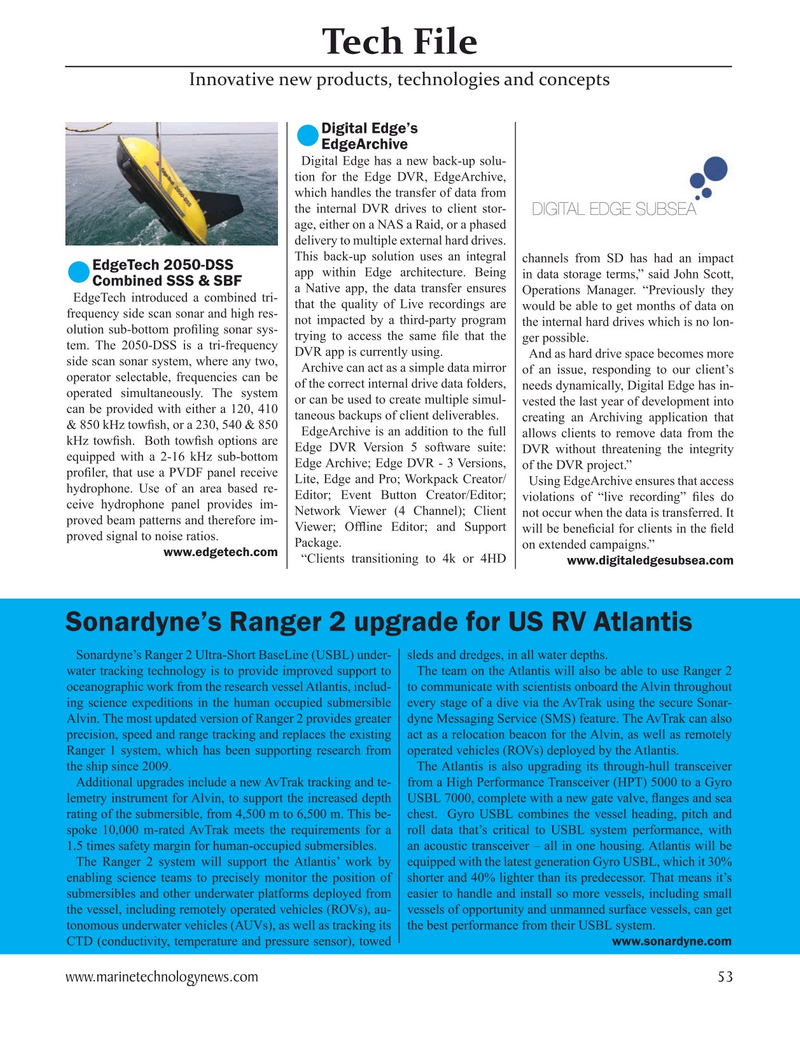 Digital Edge has a new back-up solu- tion for the Edge DVR, EdgeArchive, which handles the transfer of data from the internal DVR drives to client stor- age, either on a NAS a Raid, or a phased delivery to multiple external hard drives.

EdgeTech introduced a combined tri- that the quality of Live recordings are would be able to get months of data on frequency side scan sonar and high res- not impacted by a third-party program the internal hard drives which is no lon- olution sub-bottom pro? ling sonar sys- trying to access the same ? le that the ger possible. tem. The 2050-DSS is a tri-frequency DVR app is currently using.

And as hard drive space becomes more side scan sonar system, where any two,

Archive can act as a simple data mirror of an issue, responding to our client’s operator selectable, frequencies can be operated simultaneously. The system of the correct internal drive data folders, needs dynamically, Digital Edge has in- or can be used to create multiple simul- vested the last year of development into can be provided with either a 120, 410 taneous backups of client deliverables. creating an Archiving application that & 850 kHz tow? sh, or a 230, 540 & 850

EdgeArchive is an addition to the full allows clients to remove data from the kHz tow? sh. Both tow? sh options are

Using EdgeArchive ensures that access hydrophone. Use of an area based re-

Network Viewer (4 Channel); Client not occur when the data is transferred. It proved beam patterns and therefore im-

Viewer; Of? ine Editor; and Support will be bene? cial for clients in the ? eld proved signal to noise ratios.

Sonardyne’s Ranger 2 Ultra-Short BaseLine (USBL) under- sleds and dredges, in all water depths.

water tracking technology is to provide improved support to The team on the Atlantis will also be able to use Ranger 2 oceanographic work from the research vessel Atlantis, includ- to communicate with scientists onboard the Alvin throughout ing science expeditions in the human occupied submersible every stage of a dive via the AvTrak using the secure Sonar-

Alvin. The most updated version of Ranger 2 provides greater dyne Messaging Service (SMS) feature. The AvTrak can also precision, speed and range tracking and replaces the existing act as a relocation beacon for the Alvin, as well as remotely

Ranger 1 system, which has been supporting research from operated vehicles (ROVs) deployed by the Atlantis. the ship since 2009. The Atlantis is also upgrading its through-hull transceiver

Additional upgrades include a new AvTrak tracking and te- from a High Performance Transceiver (HPT) 5000 to a Gyro lemetry instrument for Alvin, to support the increased depth USBL 7000, complete with a new gate valve, ? anges and sea rating of the submersible, from 4,500 m to 6,500 m. This be- chest. Gyro USBL combines the vessel heading, pitch and spoke 10,000 m-rated AvTrak meets the requirements for a roll data that’s critical to USBL system performance, with 1.5 times safety margin for human-occupied submersibles. an acoustic transceiver – all in one housing. Atlantis will be

The Ranger 2 system will support the Atlantis’ work by equipped with the latest generation Gyro USBL, which it 30% enabling science teams to precisely monitor the position of shorter and 40% lighter than its predecessor. That means it’s submersibles and other underwater platforms deployed from easier to handle and install so more vessels, including small the vessel, including remotely operated vehicles (ROVs), au- vessels of opportunity and unmanned surface vessels, can get tonomous underwater vehicles (AUVs), as well as tracking its the best performance from their USBL system.