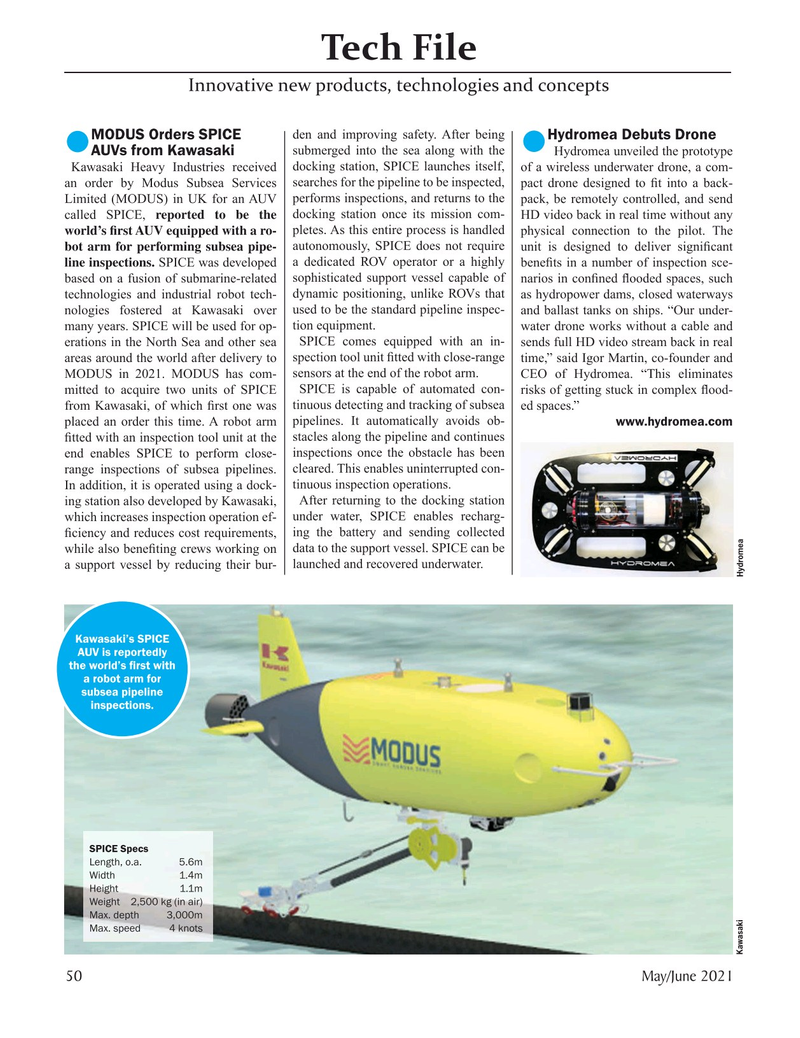 Innovative new products, technologies and concepts den and improving safety. After being

Kawasaki Heavy Industries received docking station, SPICE launches itself, of a wireless underwater drone, a com- an order by Modus Subsea Services searches for the pipeline to be inspected, pact drone designed to ? t into a back-

Limited (MODUS) in UK for an AUV performs inspections, and returns to the pack, be remotely controlled, and send called SPICE, reported to be the docking station once its mission com- HD video back in real time without any world’s ? rst AUV equipped with a ro- pletes. As this entire process is handled physical connection to the pilot. The bot arm for performing subsea pipe- autonomously, SPICE does not require unit is designed to deliver signi? cant line inspections. SPICE was developed a dedicated ROV operator or a highly bene? ts in a number of inspection sce- based on a fusion of submarine-related sophisticated support vessel capable of narios in con? ned ? ooded spaces, such technologies and industrial robot tech- dynamic positioning, unlike ROVs that as hydropower dams, closed waterways nologies fostered at Kawasaki over used to be the standard pipeline inspec- and ballast tanks on ships. “Our under- many years. SPICE will be used for op- tion equipment. water drone works without a cable and erations in the North Sea and other sea SPICE comes equipped with an in- sends full HD video stream back in real areas around the world after delivery to spection tool unit ? tted with close-range time,” said Igor Martin, co-founder and

MODUS in 2021. MODUS has com- sensors at the end of the robot arm. CEO of Hydromea. “This eliminates mitted to acquire two units of SPICE SPICE is capable of automated con- risks of getting stuck in complex ? ood- from Kawasaki, of which ? rst one was tinuous detecting and tracking of subsea ed spaces.” placed an order this time. A robot arm pipelines. It automatically avoids ob- www.hydromea.com ? tted with an inspection tool unit at the stacles along the pipeline and continues end enables SPICE to perform close- inspections once the obstacle has been range inspections of subsea pipelines. cleared. This enables uninterrupted con-

In addition, it is operated using a dock- tinuous inspection operations.

ing station also developed by Kawasaki, After returning to the docking station which increases inspection operation ef- under water, SPICE enables recharg- ? ciency and reduces cost requirements, ing the battery and sending collected while also bene? ting crews working on data to the support vessel. SPICE can be a support vessel by reducing their bur- launched and recovered underwater.

AUV is reportedly the world’s ? rst with a robot arm for subsea pipeline inspections.