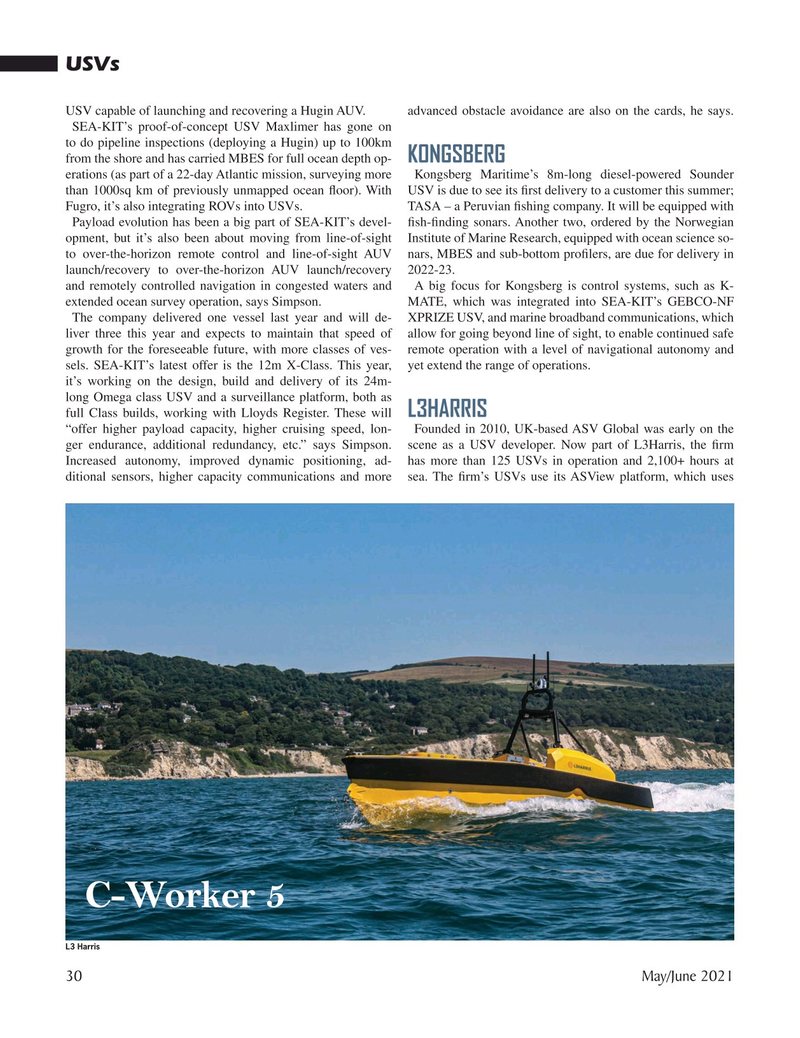 USV capable of launching and recovering a Hugin AUV. advanced obstacle avoidance are also on the cards, he says.

SEA-KIT’s proof-of-concept USV Maxlimer has gone on to do pipeline inspections (deploying a Hugin) up to 100km from the shore and has carried MBES for full ocean depth op- KONGSBERG erations (as part of a 22-day Atlantic mission, surveying more Kongsberg Maritime’s 8m-long diesel-powered Sounder than 1000sq km of previously unmapped ocean ? oor). With USV is due to see its ? rst delivery to a customer this summer;

Fugro, it’s also integrating ROVs into USVs. TASA – a Peruvian ? shing company. It will be equipped with

Payload evolution has been a big part of SEA-KIT’s devel- ? sh-? nding sonars. Another two, ordered by the Norwegian opment, but it’s also been about moving from line-of-sight Institute of Marine Research, equipped with ocean science so- to over-the-horizon remote control and line-of-sight AUV nars, MBES and sub-bottom pro? lers, are due for delivery in launch/recovery to over-the-horizon AUV launch/recovery 2022-23. and remotely controlled navigation in congested waters and A big focus for Kongsberg is control systems, such as K- extended ocean survey operation, says Simpson. MATE, which was integrated into SEA-KIT’s GEBCO-NF

The company delivered one vessel last year and will de- XPRIZE USV, and marine broadband communications, which liver three this year and expects to maintain that speed of allow for going beyond line of sight, to enable continued safe growth for the foreseeable future, with more classes of ves- remote operation with a level of navigational autonomy and sels. SEA-KIT’s latest offer is the 12m X-Class. This year, yet extend the range of operations.

it’s working on the design, build and delivery of its 24m- long Omega class USV and a surveillance platform, both as full Class builds, working with Lloyds Register. These will L3HARRIS “offer higher payload capacity, higher cruising speed, lon- Founded in 2010, UK-based ASV Global was early on the ger endurance, additional redundancy, etc.” says Simpson. scene as a USV developer. Now part of L3Harris, the ? rm

Increased autonomy, improved dynamic positioning, ad- has more than 125 USVs in operation and 2,100+ hours at ditional sensors, higher capacity communications and more sea. The ? rm’s USVs use its ASView platform, which uses