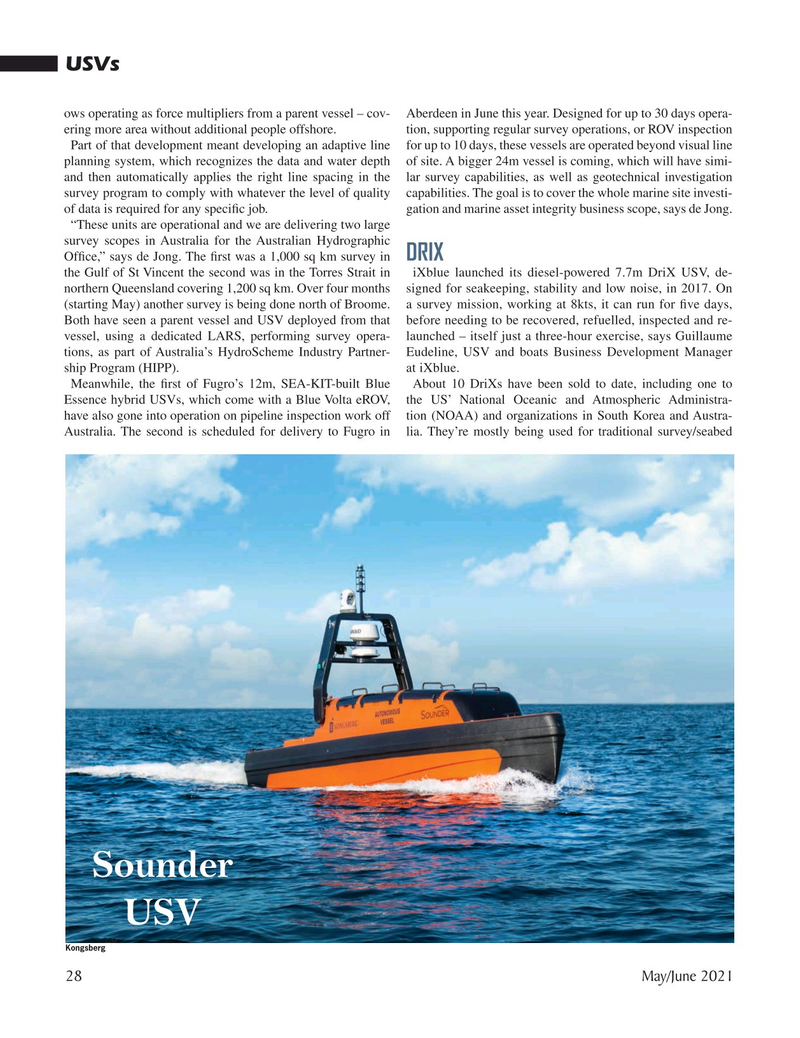 Part of that development meant developing an adaptive line for up to 10 days, these vessels are operated beyond visual line planning system, which recognizes the data and water depth of site. A bigger 24m vessel is coming, which will have simi- and then automatically applies the right line spacing in the lar survey capabilities, as well as geotechnical investigation survey program to comply with whatever the level of quality capabilities. The goal is to cover the whole marine site investi- of data is required for any speci? c job. gation and marine asset integrity business scope, says de Jong.

Of? ce,” says de Jong. The ? rst was a 1,000 sq km survey in DRIX the Gulf of St Vincent the second was in the Torres Strait in iXblue launched its diesel-powered 7.7m DriX USV, de- northern Queensland covering 1,200 sq km. Over four months signed for seakeeping, stability and low noise, in 2017. On (starting May) another survey is being done north of Broome. a survey mission, working at 8kts, it can run for ? ve days,

Both have seen a parent vessel and USV deployed from that before needing to be recovered, refuelled, inspected and re- vessel, using a dedicated LARS, performing survey opera- launched – itself just a three-hour exercise, says Guillaume tions, as part of Australia’s HydroScheme Industry Partner- Eudeline, USV and boats Business Development Manager ship Program (HIPP). at iXblue.

Meanwhile, the ? rst of Fugro’s 12m, SEA-KIT-built Blue About 10 DriXs have been sold to date, including one to

Essence hybrid USVs, which come with a Blue Volta eROV, the US’ National Oceanic and Atmospheric Administra- have also gone into operation on pipeline inspection work off tion (NOAA) and organizations in South Korea and Austra-

Australia. The second is scheduled for delivery to Fugro in lia. They’re mostly being used for traditional survey/seabed