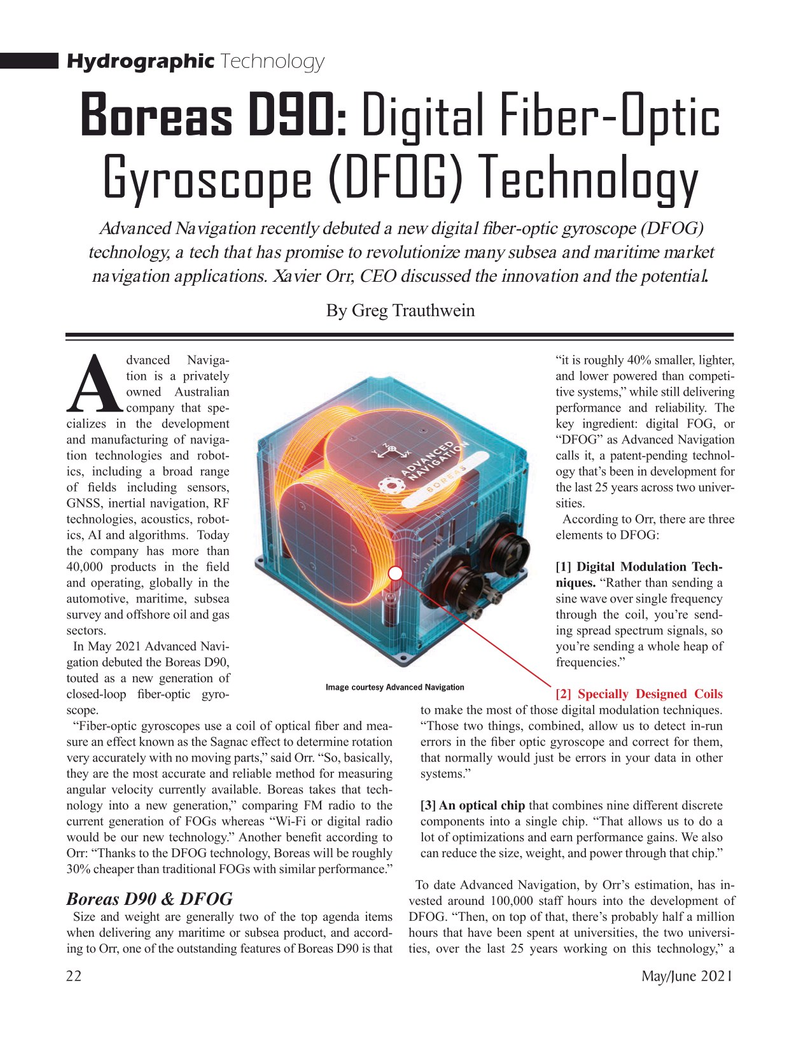 By Greg Trauthwein dvanced Naviga- “it is roughly 40% smaller, lighter, tion is a privately and lower powered than competi- owned Australian tive systems,” while still delivering

Acompany that spe- performance and reliability. The cializes in the development key ingredient: digital FOG, or and manufacturing of naviga- “DFOG” as Advanced Navigation tion technologies and robot- calls it, a patent-pending technol- ics, including a broad range ogy that’s been in development for of ? elds including sensors, the last 25 years across two univer-

technologies, acoustics, robot- According to Orr, there are three ics, AI and algorithms. Today elements to DFOG: the company has more than 40,000 products in the ? eld [1] Digital Modulation Tech- and operating, globally in the niques. “Rather than sending a automotive, maritime, subsea sine wave over single frequency survey and offshore oil and gas through the coil, you’re send- sectors. ing spread spectrum signals, so

In May 2021 Advanced Navi- you’re sending a whole heap of gation debuted the Boreas D90, frequencies.” touted as a new generation of

Image courtesy Advanced Navigation closed-loop ? ber-optic gyro- [2] Specially Designed Coils scope. to make the most of those digital modulation techniques. “Fiber-optic gyroscopes use a coil of optical ? ber and mea- “Those two things, combined, allow us to detect in-run sure an effect known as the Sagnac effect to determine rotation errors in the ? ber optic gyroscope and correct for them, very accurately with no moving parts,” said Orr. “So, basically, that normally would just be errors in your data in other they are the most accurate and reliable method for measuring systems.” angular velocity currently available. Boreas takes that tech- nology into a new generation,” comparing FM radio to the [3] An optical chip that combines nine different discrete current generation of FOGs whereas “Wi-Fi or digital radio components into a single chip. “That allows us to do a would be our new technology.” Another bene? t according to lot of optimizations and earn performance gains. We also

Orr: “Thanks to the DFOG technology, Boreas will be roughly can reduce the size, weight, and power through that chip.” 30% cheaper than traditional FOGs with similar performance.”

To date Advanced Navigation, by Orr’s estimation, has in- vested around 100,000 staff hours into the development of

Size and weight are generally two of the top agenda items DFOG. “Then, on top of that, there’s probably half a million when delivering any maritime or subsea product, and accord- hours that have been spent at universities, the two universi- ing to Orr, one of the outstanding features of Boreas D90 is that ties, over the last 25 years working on this technology,” a 22 May/June 2021