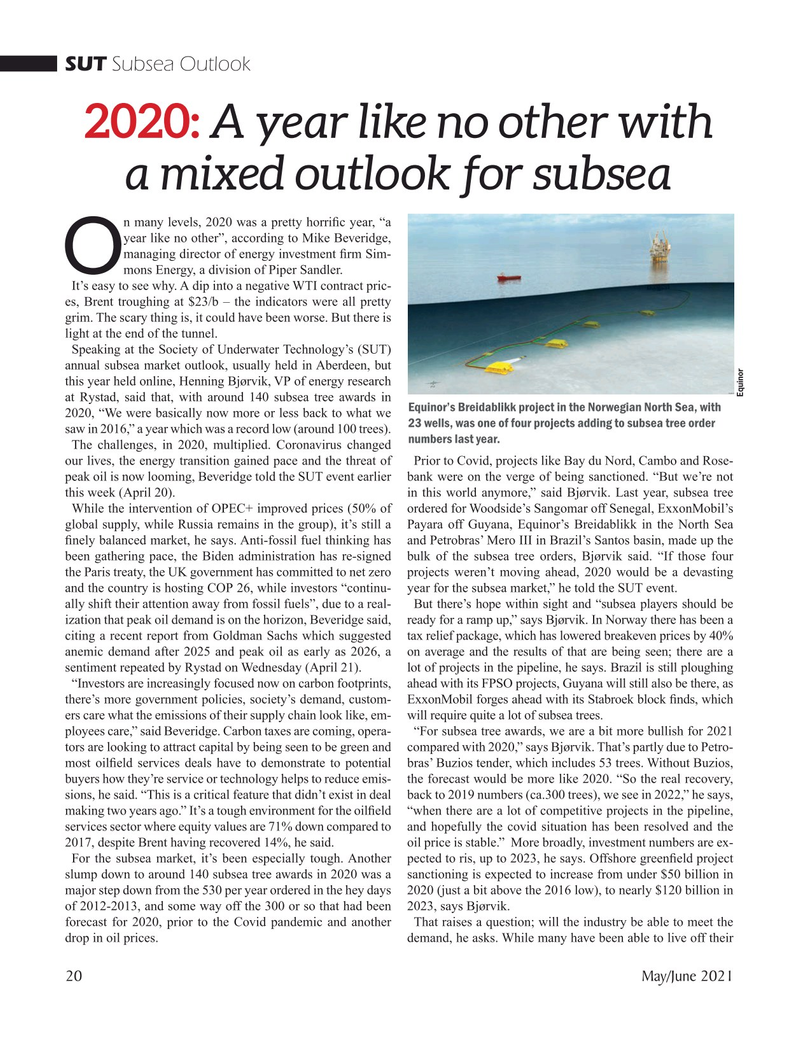 SUT Subsea Outlook 2020: A year like no other with a mixed outlook for subsea n many levels, 2020 was a pretty horri? c year, “a year like no other”, according to Mike Beveridge, managing director of energy investment ? rm Sim-

It’s easy to see why. A dip into a negative WTI contract pric- es, Brent troughing at $23/b – the indicators were all pretty grim. The scary thing is, it could have been worse. But there is light at the end of the tunnel.

Equinor at Rystad, said that, with around 140 subsea tree awards in

Equinor’s Breidablikk project in the Norwegian North Sea, with 2020, “We were basically now more or less back to what we 23 wells, was one of four projects adding to subsea tree order saw in 2016,” a year which was a record low (around 100 trees). numbers last year.

The challenges, in 2020, multiplied. Coronavirus changed our lives, the energy transition gained pace and the threat of Prior to Covid, projects like Bay du Nord, Cambo and Rose- peak oil is now looming, Beveridge told the SUT event earlier bank were on the verge of being sanctioned. “But we’re not this week (April 20). in this world anymore,” said Bjørvik. Last year, subsea tree

While the intervention of OPEC+ improved prices (50% of ordered for Woodside’s Sangomar off Senegal, ExxonMobil’s global supply, while Russia remains in the group), it’s still a Payara off Guyana, Equinor’s Breidablikk in the North Sea ? nely balanced market, he says. Anti-fossil fuel thinking has and Petrobras’ Mero III in Brazil’s Santos basin, made up the been gathering pace, the Biden administration has re-signed bulk of the subsea tree orders, Bjørvik said. “If those four the Paris treaty, the UK government has committed to net zero projects weren’t moving ahead, 2020 would be a devasting and the country is hosting COP 26, while investors “continu- year for the subsea market,” he told the SUT event. ally shift their attention away from fossil fuels”, due to a real- But there’s hope within sight and “subsea players should be ization that peak oil demand is on the horizon, Beveridge said, ready for a ramp up,” says Bjørvik. In Norway there has been a citing a recent report from Goldman Sachs which suggested tax relief package, which has lowered breakeven prices by 40% anemic demand after 2025 and peak oil as early as 2026, a on average and the results of that are being seen; there are a sentiment repeated by Rystad on Wednesday (April 21). lot of projects in the pipeline, he says. Brazil is still ploughing “Investors are increasingly focused now on carbon footprints, ahead with its FPSO projects, Guyana will still also be there, as there’s more government policies, society’s demand, custom- ExxonMobil forges ahead with its Stabroek block ? nds, which ers care what the emissions of their supply chain look like, em- will require quite a lot of subsea trees. ployees care,” said Beveridge. Carbon taxes are coming, opera- “For subsea tree awards, we are a bit more bullish for 2021 tors are looking to attract capital by being seen to be green and compared with 2020,” says Bjørvik. That’s partly due to Petro- most oil? eld services deals have to demonstrate to potential bras’ Buzios tender, which includes 53 trees. Without Buzios, buyers how they’re service or technology helps to reduce emis- the forecast would be more like 2020. “So the real recovery, sions, he said. “This is a critical feature that didn’t exist in deal back to 2019 numbers (ca.300 trees), we see in 2022,” he says, making two years ago.” It’s a tough environment for the oil? eld “when there are a lot of competitive projects in the pipeline, services sector where equity values are 71% down compared to and hopefully the covid situation has been resolved and the 2017, despite Brent having recovered 14%, he said. oil price is stable.” More broadly, investment numbers are ex-