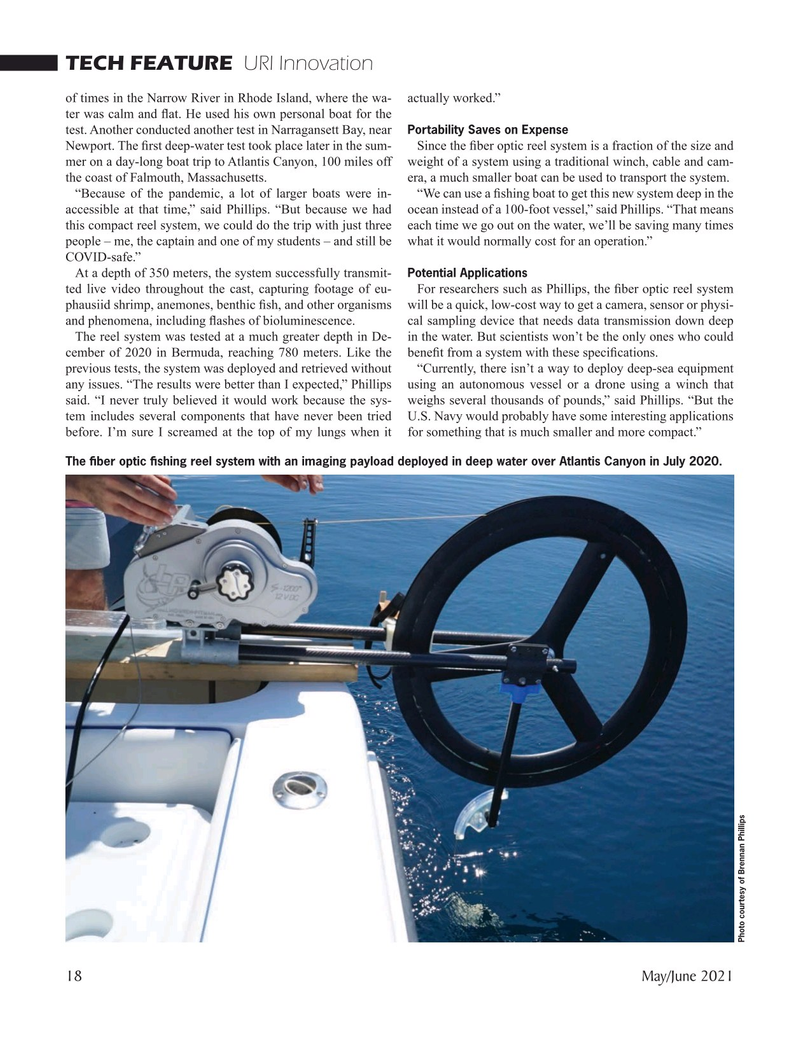 TECH FEATURE URI Innovation of times in the Narrow River in Rhode Island, where the wa- actually worked.” ter was calm and ? at. He used his own personal boat for the test. Another conducted another test in Narragansett Bay, near Portability Saves on Expense

Newport. The ? rst deep-water test took place later in the sum- Since the ? ber optic reel system is a fraction of the size and mer on a day-long boat trip to Atlantis Canyon, 100 miles off weight of a system using a traditional winch, cable and cam- the coast of Falmouth, Massachusetts. era, a much smaller boat can be used to transport the system.

“Because of the pandemic, a lot of larger boats were in- “We can use a ? shing boat to get this new system deep in the accessible at that time,” said Phillips. “But because we had ocean instead of a 100-foot vessel,” said Phillips. “That means this compact reel system, we could do the trip with just three each time we go out on the water, we’ll be saving many times people – me, the captain and one of my students – and still be what it would normally cost for an operation.”

At a depth of 350 meters, the system successfully transmit- Potential Applications ted live video throughout the cast, capturing footage of eu- For researchers such as Phillips, the ? ber optic reel system phausiid shrimp, anemones, benthic ? sh, and other organisms will be a quick, low-cost way to get a camera, sensor or physi- and phenomena, including ? ashes of bioluminescence. cal sampling device that needs data transmission down deep

The reel system was tested at a much greater depth in De- in the water. But scientists won’t be the only ones who could cember of 2020 in Bermuda, reaching 780 meters. Like the bene? t from a system with these speci? cations.

previous tests, the system was deployed and retrieved without “Currently, there isn’t a way to deploy deep-sea equipment any issues. “The results were better than I expected,” Phillips using an autonomous vessel or a drone using a winch that said. “I never truly believed it would work because the sys- weighs several thousands of pounds,” said Phillips. “But the tem includes several components that have never been tried U.S. Navy would probably have some interesting applications before. I’m sure I screamed at the top of my lungs when it for something that is much smaller and more compact.”

The ? ber optic ? shing reel system with an imaging payload deployed in deep water over Atlantis Canyon in July 2020.