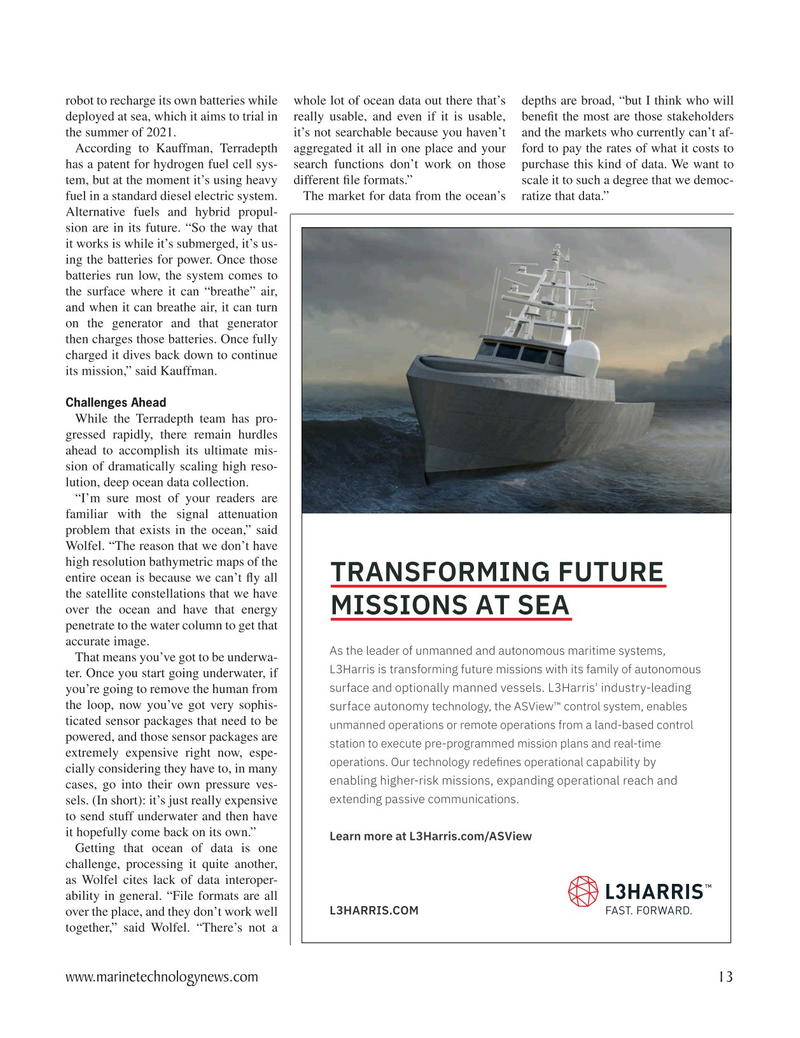 robot to recharge its own batteries while whole lot of ocean data out there that’s depths are broad, “but I think who will deployed at sea, which it aims to trial in really usable, and even if it is usable, bene? t the most are those stakeholders the summer of 2021. it’s not searchable because you haven’t and the markets who currently can’t af-

According to Kauffman, Terradepth aggregated it all in one place and your ford to pay the rates of what it costs to has a patent for hydrogen fuel cell sys- search functions don’t work on those purchase this kind of data. We want to tem, but at the moment it’s using heavy different ? le formats.” scale it to such a degree that we democ- fuel in a standard diesel electric system. The market for data from the ocean’s ratize that data.”

Alternative fuels and hybrid propul- sion are in its future. “So the way that it works is while it’s submerged, it’s us- ing the batteries for power. Once those batteries run low, the system comes to the surface where it can “breathe” air, and when it can breathe air, it can turn on the generator and that generator then charges those batteries. Once fully charged it dives back down to continue its mission,” said Kauffman.

“I’m sure most of your readers are familiar with the signal attenuation problem that exists in the ocean,” said

Wolfel. “The reason that we don’t have high resolution bathymetric maps of the

TRANSFORMING FUTURE entire ocean is because we can’t ? y all the satellite constellations that we have over the ocean and have that energy

MISSIONS AT SEA penetrate to the water column to get that accurate image.

As the leader of unmanned and autonomous maritime systems,

That means you’ve got to be underwa- is

L3Harris transforming future missions with its family of autonomous ter. Once you start going underwater, if optionally manned vessels. L3Harris' industry-leading surface and you’re going to remove the human from the loop, now you’ve got very sophis- surface autonomy technology, the ASView™ control system, enables ticated sensor packages that need to be unmanned operations or remote operations from a land-based control powered, and those sensor packages are station to execute pre-programmed mission plans and real-time extremely expensive right now, espe- operations. Our technology rede?nes operational capability by cially considering they have to, in many enabling higher-risk missions, expanding operational reach and cases, go into their own pressure ves- extending passive communications.

sels. (In short): it’s just really expensive to send stuff underwater and then have it hopefully come back on its own.”

Getting that ocean of data is one challenge, processing it quite another, as Wolfel cites lack of data interoper- ability in general. “File formats are all

L3HARRIS.COM over the place, and they don’t work well together,” said Wolfel. “There’s not a www.marinetechnologynews.com 13