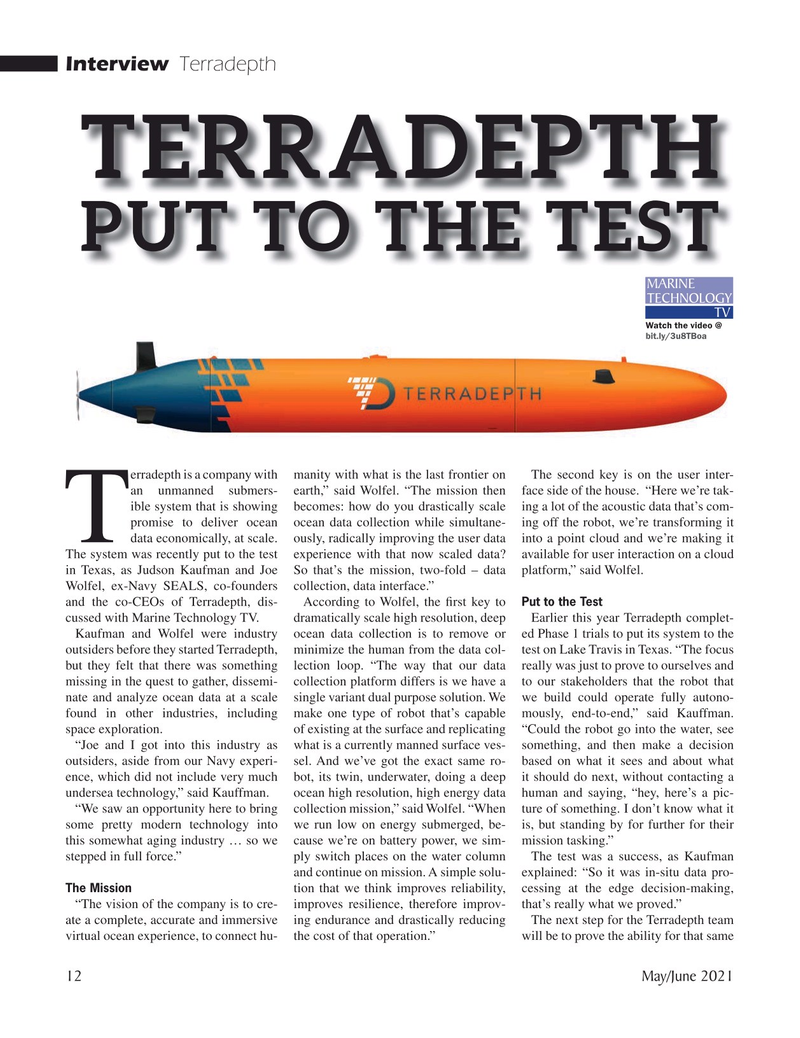 PUT TO THE TEST

Watch the video @ bit.ly/3u8TBoa erradepth is a company with manity with what is the last frontier on The second key is on the user inter- an unmanned submers- earth,” said Wolfel. “The mission then face side of the house. “Here we’re tak- ible system that is showing becomes: how do you drastically scale ing a lot of the acoustic data that’s com- promise to deliver ocean ocean data collection while simultane- ing off the robot, we’re transforming it

Tdata economically, at scale. ously, radically improving the user data into a point cloud and we’re making it

The system was recently put to the test experience with that now scaled data? available for user interaction on a cloud in Texas, as Judson Kaufman and Joe So that’s the mission, two-fold – data platform,” said Wolfel.

Wolfel, ex-Navy SEALS, co-founders collection, data interface.” and the co-CEOs of Terradepth, dis- According to Wolfel, the ? rst key to

Kaufman and Wolfel were industry ocean data collection is to remove or ed Phase 1 trials to put its system to the outsiders before they started Terradepth, minimize the human from the data col- test on Lake Travis in Texas. “The focus but they felt that there was something lection loop. “The way that our data really was just to prove to ourselves and missing in the quest to gather, dissemi- collection platform differs is we have a to our stakeholders that the robot that nate and analyze ocean data at a scale single variant dual purpose solution. We we build could operate fully autono- found in other industries, including make one type of robot that’s capable mously, end-to-end,” said Kauffman. space exploration. of existing at the surface and replicating “Could the robot go into the water, see “Joe and I got into this industry as what is a currently manned surface ves- something, and then make a decision outsiders, aside from our Navy experi- sel. And we’ve got the exact same ro- based on what it sees and about what ence, which did not include very much bot, its twin, underwater, doing a deep it should do next, without contacting a undersea technology,” said Kauffman. ocean high resolution, high energy data human and saying, “hey, here’s a pic- “We saw an opportunity here to bring collection mission,” said Wolfel. “When ture of something. I don’t know what it some pretty modern technology into we run low on energy submerged, be- is, but standing by for further for their this somewhat aging industry … so we cause we’re on battery power, we sim- mission tasking.” stepped in full force.” ply switch places on the water column The test was a success, as Kaufman and continue on mission. A simple solu- explained: “So it was in-situ data pro-

The Mission tion that we think improves reliability, cessing at the edge decision-making, “The vision of the company is to cre- improves resilience, therefore improv- that’s really what we proved.” ate a complete, accurate and immersive ing endurance and drastically reducing The next step for the Terradepth team virtual ocean experience, to connect hu- the cost of that operation.” will be to prove the ability for that same 12 May/June 2021